Microsoft Works 2000 to Microsoft Excel 2003 - LibreOffice has the answer

So I've given away the plot, to misquote Kenny Everett …

One of my family members had a spreadsheet, which she was struggling to open in Microsoft Excel.
Originally, the spreadsheet had been created in Microsoft Works 2000, on Windows 98.
Time has moved on ...
Now we have Excel, as part of Office 2003, which doesn't appear to have an import filter for Works.
The internet was full of solutions, including a less-than-helpful Microsoft article: -
Works: How to import and export Works spreadsheets to Excel
which assumes that one still has Works :-(
I even considered, but quickly rejected, various pieces of "Too good to be true" conversion software which just may be malware.
Oh, and a website that wanted to charge me money for a "service" ….
I should've known that there'd be a better solution …
I mailed the spreadsheet to myself, downloaded it to my Mac, double-clicked on it, and up it popped in …

I was able to quickly save it in the right format: - 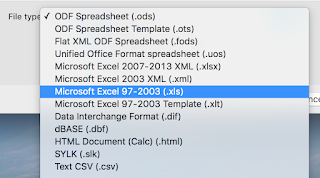 and mail it back.
Hopefully the job is a good 'un ….
PS For the record, I also considered using Google Docs - I've just checked, and that'd also have worked a treat :-)