macOS Time Machine to Synology DiskStation - have I solved it ?

So I've been battling with Time Machine on my Mac this past few days, trying/failing to get it to backup to my Synology DiskStation Network Attached Storage (NAS).

I have an older model DS414, with ~2 TB of disk, configured as RAID, and have written about my fun with this device before including getting a nice fast Ethernet connection at 1000baseT.

I've used this box for TM backups for a long while ....

So, for I'm not sure what reasons, this week, things started going a bit awry with backups failing to complete with: - 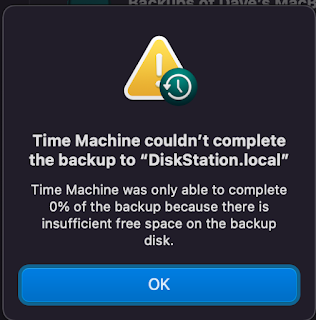 which makes no sense, given how much storage I appear to have available to me: -

After much faffing about, I decided to REDO FROM START, and deleted the existing backup ( such as it was ), the shared folder AND the user ( on the NAS, by which the Mac authenticates to the Synology over SMB ).

This provided some useful inspiration: -

How do I back up files from my Mac to Synology NAS using Time Machine?

These are some of my settings: - 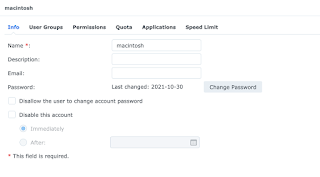 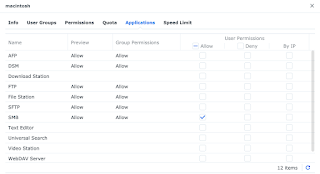 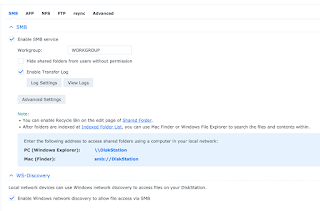 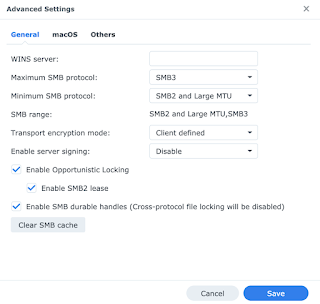 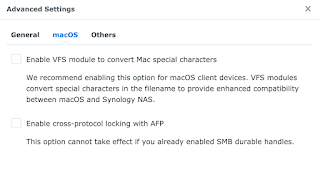 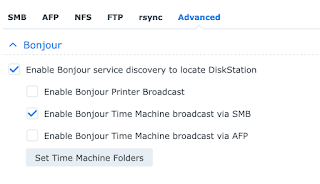 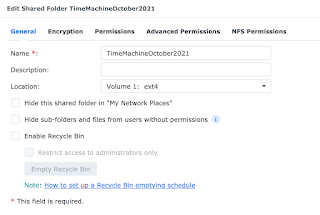 Other than that, at a friend's suggestion, I did set: -
debug.lowpri_throttle_enabled: 1
on macOS - whether/not that made any difference, I'm not sure, but I personally doubt it.
At a guess, it was a problem with the user account, perhaps a quota setting ....
Either way, so far, so good, which is nice
at November 01, 2021

Leaving this here to remind my future self ... I wanted to generate a variable containing my SSH public  key .. I tried to simply copy the k...