I was seeing this: -

when attempting to access the Admin Console of my newly-built iBM Cloud Private (ICP) 2.1.0.2 environment: -
https://192.168.1.100:8443/console/
This occurred after I started up the three VMs that comprise the ICP environment after a few days of downtime.
I kept an eye on the running Docker containers on the Boot node: -
docker ps -a|more

Apart from booting up the VMs, I didn't explicitly restart the Docker engine, as per this: -
…
systemctl restart kubelet docker
…
Restarting your cluster
working on the assumption that the kubelet and docker services would autostart.
I did check that both services were running: -
systemctl -l|grep -i kubelet.service
kubelet.service loaded active running   Kubelet Service
systemctl -l|grep -i docker.service
docker.service loaded active running   Docker Application Container Engine
As it turns out, my patience was rewarded …. 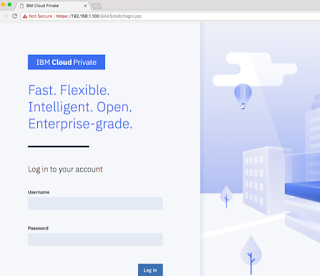 In other words, it just started working.
In case it helps. this is also worth a look: -
Review the known issues for version 2.1.0.2.
which reminded me that I could've used this: -
journalctl -u kubelet -f
to see what was going on.
at April 09, 2018

Docker and Node and macOS - Computer Said No