As per the past few posts, I've been learning my way around IBM API Connect, and had it nearly working - until about 15 minutes ago when it ALL started working.

Without getting too deep into the What and How, the TL;DR; is this …..
I have three VMs; the API Manager, the Developer Portal and the DataPower Gateway.
As per a previous post: -

IBM API Connect - Adding IBM DataPower Gateway into the mix - SOMA import failed
I'd moved DataPower onto a different Mac, as it requires 8 GB RAM.
I'd sensibly configured that VM to use Bridged, rather than NAT, networking, in order that the API Manager ( APIM ) could "see" DataPower.
However, I'd left APIM and the Portal using NAT networking on the main Mac, for no other reason that laziness.
That was where things went wrong.
Whilst I could happily add the DataPower Service and Service into the APIM configuration, using the Cloud Management Console, I was hitting a 404 whenever I tried to test my APIs, even though the Endpoint was correctly configured: -

So here's the thing ….
Whilst it's crucial that APIM can see DataPower, it's also quite important that DataPower can see APIM :-)
One thing that gave me a clue was this UI: - 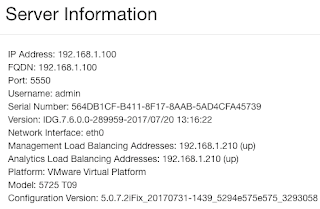 but had previously reported the Management Load Balancing Addresses as (a) being the old NAT address of APIM itself and (b) as down.
Once I switched to Bridged, and sorted out my IP addresses, making sure that I was using addresses in the same subnet, to avoid the need for messy routing …. things suddenly became better.
I did sketch out the networking topology a few months back : - 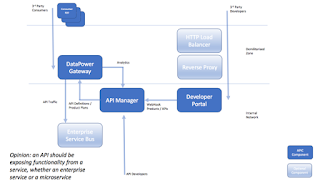 so I really should've known better.
Bottom line, whilst APIM needs to "see" DataPower, DataPower also needs "see" APIM
If it helps, this is also a rather useful introduction to the networking requirements: -

This was very useful, Thank you.